​​​how you become a master paddle carver... 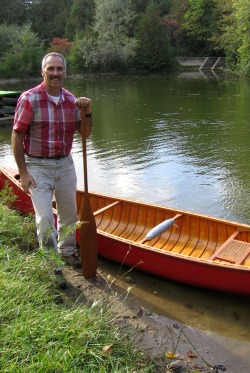 ﻿Bruce Smith’s love of paddles and all things ﻿“canoe” started at age 9 when he first attended Orillia YMCA’s Camp Summerland. This led to summers spent as a counselor, then canoe trip leader and eventually to building his own canoe in the boiler room of his high school in Newmarket, Ontario.

During university, in the 1970’s, he continued his canoe craft education by working summers at the Ontario Camp Leadership Centre at Bark Lake in Haliburton. Maintaining and repairing a fleet of fine old Peterboroughs and Chestnuts cemented the love affair begun as a child with cedar canvas canoes and built the foundational expertise Bruce has carried with him throughout the years.

It was at this time that he also completed his Master Level in Canoeing and perfected carving his own paddles. Fellow canoeists quickly recognized the high calibre of these custom-designed, hand carved pieces of “functional art”. They were praised both for beautiful design and for superior performance in the water. Bruce’s paddles were sought after at Canoe Instructor Schools such as Camp Kandalore’s in Haliburton where he guest lectured on paddle making and canoe maintenance. In those early days, he was also a one-time exhibitor at the Toronto Sportsman Show. 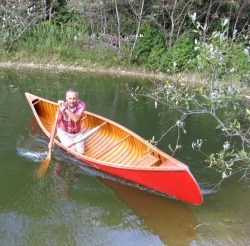 Bruce’s “official” career for 30 years was as a school teacher. Since 1992 he has lived in the Elora / Fergus area where he and his wife have raised 4 children.

He taught Construction Technology and Outdoor Education to young people in drug & alcohol treatment. Under Bruce’s direction there were many special projects, including constructing log buildings and of course, canoes and paddles. In January 2009 Bruce retired...and smoothly transitioned into a second career based on a first love... artisan paddle carver.

Bruce’s paddles and canoes continue to be prized by those who own them. As for Bruce, he is still a canoe trip guide and teacher at heart. His hope and passion is to help equip people to find the special and beautiful places nature has to offer.